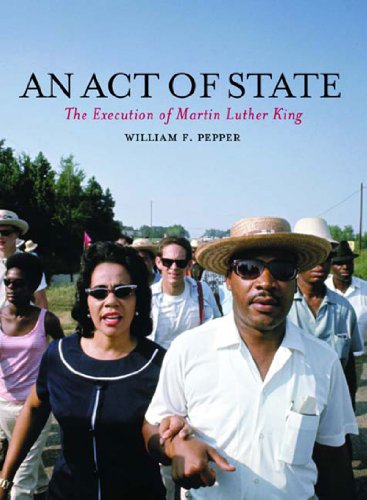 AN ACT OF STATE: The Execution of Dr. Martin Luther King Jr.

Forget everything you think you know, Pepper insists. James Earl Ray did not pull the trigger. The journalist-turned-lawyer's previous title, , was more a prelude to this title than the final word.

Twenty years after James Earl Ray was convicted, Pepper set out to clear him; in the process, he brought to light reams of evidence that were ignored in the original trial. The key to his case is Loyd Jowers, a bar owner who claims to have disposed of the murder weapon at the request of a local mob figure. Partially on the strength of the material, Pepper won the support of King's wife and children, who brought Jowers and "unknown co-conspirators" to trial in a civil wrongful death suit in 1999. Dozens of witnesses contributed to a forceful, detailed case that accused the FBI, the CIA, the U.S. military, the Memphis police, and local and national organized crime leaders. After only an hour of deliberation, the jury found for the King family. The accusers, led by Pepper, cried vindication and fully expected to be at the center of one of the biggest news stories of the century. But the trial and the verdict barely registered in the media. Appalled by the silence that followed, Pepper remained determined to bring the details of his exhaustive probe and subsequent civil case to the public, and the result is this exacting book, dense with evidence and analysis of the murder.

Pepper sets the tone by recalling the state of civil unrest in this country during the late 1960s and why King's radical activism was such a threat to government and corporate leaders. Simply put, Pepper claims those in power were scared to death of the mass mobilization King's Poor People's Campaign might have inspired. Pepper gradually introduces the vast cast of characters in a dizzying murder conspiracy that winds from a Memphis bar through the shadows of organized crime to the far reaches of national government. He carefully maps each player's place and role in the tangled web and doggedly tries to stick to a straightforward narrative. The number of unanswered questions complicates those efforts, but does not cloud the evidence that Ray was not the shooter.

Pepper attempts nothing less than a rewrite of history, and a spurring of further investigation. While his moralizing epilogue on the deterioration of democracy is distracting, it is heartfelt, and honors Pepper's commitment to King's legacy.