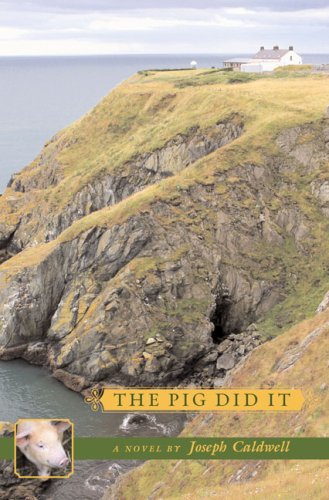 The Pig Did It

Unhappy in love, New York creative writing instructor Aaron McCloud, 32, arrives in Western Ireland’s County Kerry to suffer amid its natural beauty in this very funny sixth novel from Caldwell ( ). Aaron stays with his aunt Kitty, who makes a living rewriting the classics (her version of Oliver Twist features lots of repentance), but Aaron’s wallow in self-pity is interrupted by a lost pig that attaches itself to him. When the pig digs up a human skeleton buried in the backyard, Kitty identifies the remains as the missing Declan Tovey and blames the pig’s mischievous owner, Lolly McKeever. But Lolly won’t admit to owning the pig, let alone killing Declan, and Aaron, for his part, is attracted to Lolly and suspicious of his aunt, who had her own reasons for wanting Declan dead. The stage is set for an Irish country comedy of manners in which darts, pints, pigs and burial plots all play a part. Caldwell’s shaggy pig story, the first of a projected trilogy, puts farcical doings into lilting language and provides a payoff that is as unexpected as it is satisfying.