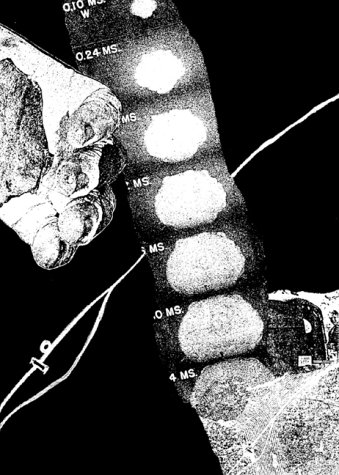 Like Ashbery in his recent Girls on the Run, veteran avant-gardist Coolidge here indulges in fantasies of serious play among grownups, creating a landscape in which words themelves become characters--hinting at their psychological dimensions, and in the end departing having pleased, perverted or deceived: ""In the Land of Oo Bla Dee/ stooping distance from the Renal Tailpiece/ wore the uniform to the very edge/ clasping of the mudguard// Progress Hornblower was a liar...// But there's a lowline limiter / and Jimmy Semester is lifting it/ riffs and breaths all hauled away."" There is something that is not so much anti-intellectual as defiantly slap-happy about the way Coolidge uses language throughout these short and shortish poems, as the poet freely admits (""is there a brain at the end of this line?/ Tsathoggua!""). If American poets since the '60s cannot be given credit for having invented Surrealism, Coolidge here shows that the basic premises of automatism thrum beneath our collectively scrambled, consumerized consciousnesses. (There's even a touch of Kerouac, though the method is clearly more witty, William S. Burroughs paranoic-to-the-people.) Fans of Coolidge might be disappointed that this upteenth book doesn't extend beyond the exciting, nearly hallucinogenic writing of his earlier collections of short poems, such as Solution Passages and Sound as Thought, or as deep as Coolidge classics At Egypt or The Crystal Text. But for newcomers to this important American poet, Nameways' rollicking tour de frisson is a great, provocative place to start. (June) FYI: ""We have dirt ruts where bombs are grown/ later bombs are thrown/ but polished all over/ done to a pewter."" Also due this month is Coolidge's Bomb, a bizarrely playful, ambiguous, book-length verse-meditation on explosions, irradiated deserts and other extreme scenes. Keith Waldrop (Hegel's Family) contributes a series of pleasantly disorienting collages, based, like the poems themselves, on photos of the Manhattan Project. (Granary [www.granarybooks.com], $12 paper 48p ISBN 1-887123-32-6)
close
Details