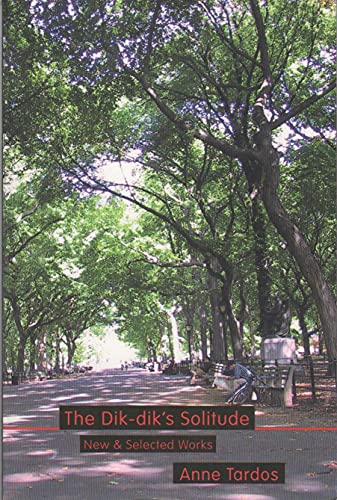 Excerpting from poetic, video and photographic work from over 12 years, this largish, elegantly designed book is a virtual encyclopedia of artistic techniques mostly operating within the traditions of Dada and collage (Kurt Schwitters looms heavily), Fluxus and early digital art (much of it created with Ataris), right through Language poetry, but creating a gendered, polylingual, image-enhanced reality all its own. In the epistolary dialogue with Lyn Hejinian that prefaces the book, Tardos explains her approach as being one of uncertainty: "Maybe it's a question of creating a condition of not knowing what one is about to do. Or should I say it takes enormous discipline and control to surrender control." Reflecting her nomadic European roots, Tardos also conveys a more poignant concern that her operations between media, not settling on one genre such as "poetry," may strand her in a "liminal" zone between art forms, though not outside of "art." Yet the poems of "The Tree Grille" have a lithe, but meaty, quality, their Dada impertinences countered by a stable, never tepid rhythmic base, resembling in this way the work of Tardos's partner and frequent collaborator Jackson Mac Low, who appears in several of the digitally enhanced images throughout the book. "Mayg-shem Fish" is a jaunty imaginary chronicle of a Tardos-and-Mac Low performance that provides a touching window on their meeting, while the footnotes to "Four Plus One K" provide an irreverent counterbalance to the sequence's center-stage word-voyages: "Dictionary sailboat refers to the practice of going sailing inside a dictionary." Fans of Tardos' previous books, including the terrific based , will discover a versifying wordsmith they hadn't anticipated, one with notes of formal grace and a sense of cross-media camaraderie that expands bandwidths all around.