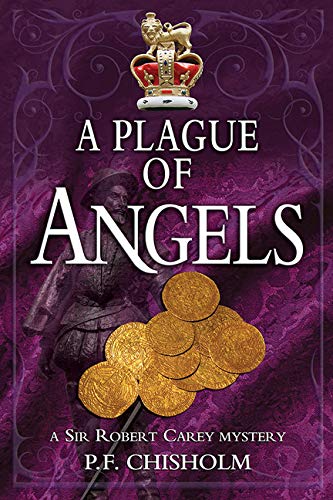 A Plague of Angels

In this fourth mystery featuring Sir Robert Carey (after A Surfeit of Guns), strong writing and a wealth of detail about Elizabethan London cannot make up for a painfully slow plot. The book opens with Carey and his sidekick, Sergeant Dodd, on the road to London, a clever and lively scene that promises much more action than what actually follows. Carey, based on a historical figure of the same name, has been called to the city by his father, Lord Chamberlain Hunsdon, half-brother to Queen Elizabeth, to search for his missing brother Edmund. It seems Edmund, never the most sensible of men, has gotten himself mixed up in false alchemy and counterfeiting, a crime that is considered treason. As Carey and Dodd investigate the scheme that drew in Edmund, they discover that Thomas Heneage, the greedy and cruel vice chamberlain, is almost certainly involved. Facts, however, are as elusive as Edmund continues to be. Alternately helped and hindered by the playwrights Christopher Marlowe and William Shakespeare, and merely frustrated by the poet Robert Greene, Carey and Dodd dart about the streets of London, visiting bars and churches, literally avoiding the plague as well as the wiles of the lovely Mistress Bassano. Traitors and allies are finally sorted out in the Fleet, a debtor's prison in London that Chisholm (the pseudonym of historical novelist Patricia Finney) portrays in all its sordid misery. (Nov. 30)
close
Details