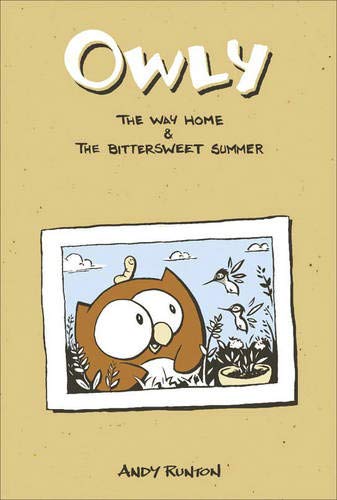 In this charming series by mini-comics specialist Runton, Owly and Wormy carry out their dialogue-less but absorbing activities in classic best-friend fashion. They live together in a friendly forest reminiscent of the ones often found in children's literature, and much in the style of Frog and Toad, or Winnie the Pooh and Piglet, Owly and Wormy's smallest excursions and challenges are the stuff of great mystery and adventure. With nothing but significant looks and great lashings of expressive ink, Runton brings these gentle characters and their concerns vividly to life. In the story "The Way Home," we learn how Wormy, initially terrified of the bird of prey, moves from fear to trust when Owly saves his life and later convinces his skeptical worm parents that Owly is a valuable friend. In "The Bittersweet Summer," the pair befriends some hummingbirds who must leave them behind when it's time to fly south for the winter. In both tales, the plots are simple enough for children to grasp, yet the characterizations will draw in all but the most reluctant adults. Owly is mostly made up of a large, expressive pair of eyes, while Wormy is little more than a squiggle and a smile. They wear sun hats while gardening and scarves during winter. Though it doesn't sound like much, under Runton's pen, the whole is winningly lively.