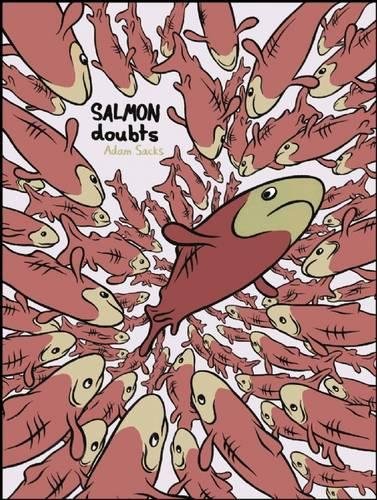 This animal fable in modern dress concerns a salmon named Geoff tormented by existential questions: why was he hatched? how can he overcome his shyness around the female salmon with whom he longs to spawn? who are these self-appointed leaders of the group, and how is it that they have their power? why must he swim upstream and face his doom? Geoff eventually finds his destiny by breaking away from the pack and heading out toward the open ocean, while his best friend, Henry, is content to continue upstream, spawn with his love-object, Samantha, and die. Sacks's graphic novel is really more of a short story; it mostly has only one or two panels per page. The point, though, isn't its plot: it's the central allegory of the teenage struggle to define one's identity. Sacks's artwork is smooth and witty, executed with bold, expressively gestural lines. Geoff and Henry look exactly alike, and like all the other salmon—that's sort of the idea—but the snappy dialogue keeps it clear who's who, and the scenes where Geoff discovers the joys of the great ocean (and the terrors of humans with fishing poles) vary the fluid visual pace of the rest of the story just enough to get across what a difference small things can make in a young creature's environment.