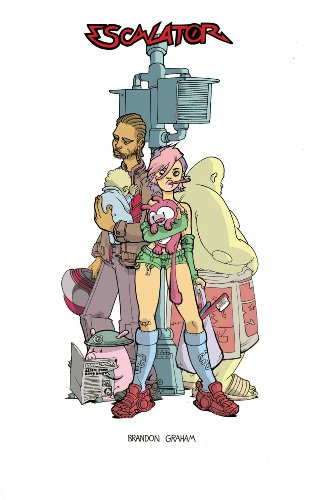 Three parts skater-cartooning to one part graffiti art, Graham's eccentric visual style drives this collection of odd, disconnected short comics stories with one foot in everyday city life and the other in the alien goo of a space warp. When Graham experiments with a semiconventional form and deadpan narration, as in the science fiction piece "Ieonium Blue," it's mostly to thumb his nose at the idea that anyone would want to look at anything other than the pictures. The stories are populated by aliens, zombies and lonely guys trying to get over breakups and stale sugarless candies; one is narrated by a man who buys contraband extraterrestrial porn magazines and nearly gets mixed up in some sort of creepy business related to them, but manages to walk away to do his grocery shopping. Mostly these tales are a vehicle for Graham's artwork, with its hyperstylized, detailed machines, gnarled urban landscapes and loose, bold, cartoony characters. It's showy and original, but also fairly undisciplined, and a full book of it gets to be a little hard on the eyes; most of the stories end with a flourish that doesn't have much to do with what came before it. In small doses, though, it's promising, especially "True Crime," a down-to-earth vignette about two friends executing a massive graffiti project on a subway car.