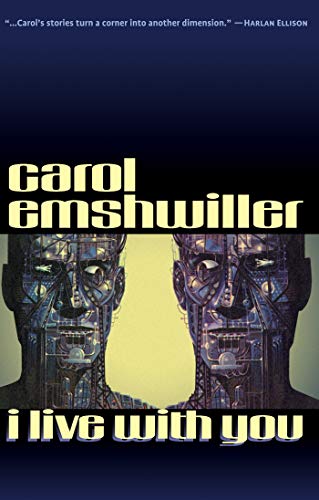 I LIVE WITH YOU

Compassion and a sly sense of humor shape the insight-filled fiction that makes up this collection from Hugo- and Nebula-winner Emshwiller ( ). Skirting the border between fantasy and SF, the 12 stories, all published since 2002, feature broadly drawn characters and situations that give them the universality of fables. "Boys," one of several explorations of the theme of war, is narrated by a nameless young man who, like all boys his age, is snatched from his town by men to become a soldier. "The Library," "The Assassin or Being the Loved One" and "My General" all till the same ground, depicting men as instinctively drawn to war and women as inherently nurturing and forgiving of the boys they raise to become men. Emshwiller presents the intransigence of the sexes as both tragic and comic, especially in "Coo People" and other stories of love-smitten aliens seducing human lovers with wildly unpredictable results. Lyrical and resonant, these tales will appeal to lovers of fiction with a speculative edge.