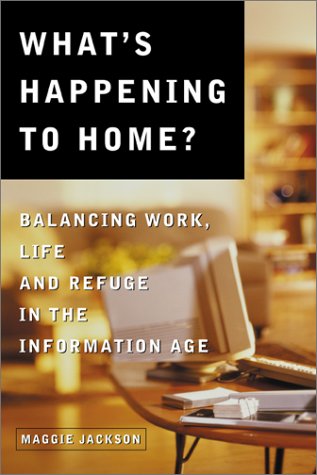 WHAT'S HAPPENING TO HOME?: Balancing Work, Life, and Refuge in the Information Age

Jackson, an Associated Press workplace columnist, asserts that Americans have rephrased the maxim "home is where the heart is." According to her, home has been transformed from a haven offering solitude from the world to something akin to a railroad station. She has spent years observing Americans' work habits and lifestyles, noting the career trends that have transformed the country. She creates a map charting the evolution of the changing workplace, positing that only as paid work moved outside the home did family life become more intimate and homes grow private. By the Industrial Age, the home was idealized as a sanctuary. But now we live in an era in which people who have their own communications technology constantly scramble to build new barriers and adjust the degree of access others have to them. Jackson also addresses those who work from home, who, she writes, are stressed because they can't escape work and because home offices create forced intimacy as clients venture into what was once a very private domain. According to Jackson, the result of all of this hustling from home has been a market in which some of the topselling home furniture is designed to bring work into all parts of the house. That's a plus for furniture manufacturers; however, all of this obsessing over work has left many children stranded. Jackson has crafted an insightful book, more a cultural study than a guidebook, that will make readers reexamine how, where and why they work.