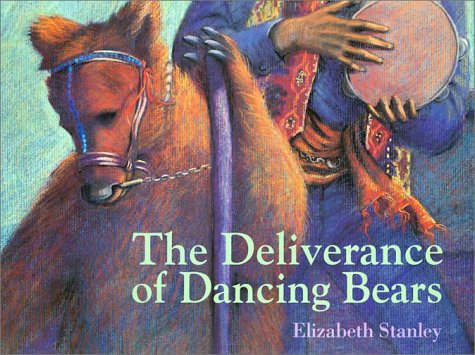 THE DELIVERANCE OF DANCING BEARS

Teeth sawn off, claws stunted, her back beaten with a wooden rod, a dancing bear performs all day, but spends her nights "curled into herself, eyes closed, wandering the forests of her mind." Readers may find Australian Stanley's frank, moving portrayal of the abused ursine entertainer tough going at first, but ultimately they will be heartened by the turn of events. Equally poignant illustrations play up the contrast between the bear's reality versus her fantasies of freedom. Stanley renders a spread of the bear's vision of fishing in a stream in lush blues and foamy white, and a predominantly golden spread of her cuddling her cubs in realistic pastel strokes on ribbed paper. While held captive, the bear is depicted in purples, blues and oranges that show up even in the bear's coat, creating an

otherworldly aura. A respected village elder buys the bear's freedom, and when he offers his savings a second time for a dancing cub, the crowd rises up against the cruel trainer—but the elder stops them: "Sometimes one must pay a high price for a different life, for a life one has dreamed of." Illustrations of the bear with her liberator return to lifelike shades, indicating that the bear's reality and dream life have at last united. Other than an occasional lapse into loftiness ("a fitting kind of restitution," for example), Stanley delicately and accessibly addresses rather big concepts—animal rights, selflessness and how one person can move a crowd from "dumb curiosity" to moral outrage. Ages 5-9.