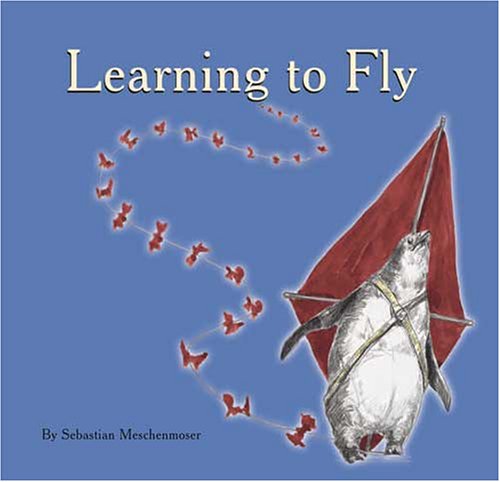 Penguin fanciers may not know what to make of this pep talk, originally published in Germany, which reckons that flightless birds might take to the air if only they had faith in themselves. "Last winter, I found a penguin," explains the deadpan storyteller, a bearded adult bundled up for winter and looking down at his knee-high feathered friend. He says the penguin knew how to fly until "he met some other birds./ They said, 'Penguins can't fly.'/ And he thought, 'They're right.'/ That's when he crashed." The man takes the penguin home—one terrific image pictures the bird snoozing in the kitchen sink—and together they do calisthenics with a goal of getting airborne. Near-wordless sequences depict various Icarus schemes like glued-on feathers and a red kite-as-backpack; some slapstick moments (such as the bird spinning in the clothes dryer to test "body stress levels") look like animal cruelty, owing to the naturalism of the pencil illustrations. Meschenmoser's charcoal-gray-on-white sketches (with subtle color details) recall the similarly birdy work of Käthi Bhend, as does this economical paper-over-board book's six-by-six trim size. The artist limns an appealing penguin—which finally soars when it sees "a penguin colony... flying overhead"—but even true believers must admit that his premise is silly. Don't penguins' actual talents, like deep-sea swimming, compensate for flightlessness? All ages.