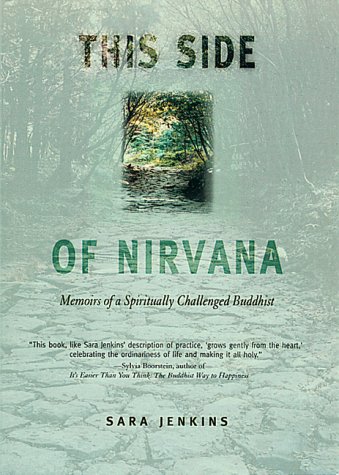 THIS SIDE OF NIRVANA: Memoirs of a Spiritually Challenged Buddhist

The storyteller's art is an ancient talent that Jenkins () puts to good use in her autobiographical account of the spiritual restlessness that eventually led her to the calm of Buddhist practice. She has crafted a helpful work for spiritual seekers who are unsure of the way and their ability to follow it. The story unfolds with Jenkins's classic depiction of an un-rooted personality who is certain that the next trip, town, job or relationship is the answer. While traveling in India, she received a glimmer of the light that would eventually characterize her daily path as one of peace and reasonably balanced contentment. This book is also very much an examination of the role of the spiritual teacher in a seeker's life, a parable of delicate balance that applies beyond this book's Buddhist borders. Jenkins is a likeable guide and an able raconteur, especially when detailing the passage of time in meditation and the feelings of being a part of an earnest spiritual community. She has mastered a difficult if traditional form of writing that exposes her weaknesses and transforms them into gifts for those of us who are also "spiritually challenged," which Jenkins still claims to be.