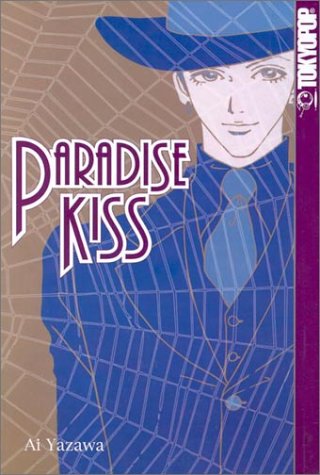 Beautiful, long-legged Yukari should be preparing for her entrance exams, but she can't tear herself away from the excitement at the Paradise Kiss fashion studio. Ever since the gang of students–cum–fashion designers invited her to be their model, Yukari has been fascinated by them. There's George, the possibly bisexual head designer who's romancing her, and Miwako, a golden-haired darling who's becoming a solid friend. Miwako's boyfriend, Arashi, is sarcastic but sweet, and Isabella, a gorgeous transsexual, is gracious and welcoming. Is it any wonder Yukari will do anything to join the party? She gets her chance to prove her mettle when George decides to design a beaded dress and Yukari volunteers to help. Soon enough, Yukari's a regular at the studio, but it's not improving her romance with the aloof George. Fashion isn't nearly as fickle, however, and eventually Yukari quits school and is subsequently kicked out of her house, all in the name of joining the world she loves best. With pages full of outrageous fashions and romantic reversals, all intricately inked, this manga makes the most of its traditionally feminine topic. Yet Yazawa is confident enough to play with it, endowing the characters with an awareness that they're playing their lives out in a comic book. Yukari announces she's the main character on the first page, and when she learns George might be sleeping with her hairdresser, she wonders if this is "really the kind of manga we want this to be?" The intelligence behind the dialogue holds the wild plot together, and like Yukari, readers will find this world an almost irresistible escape.