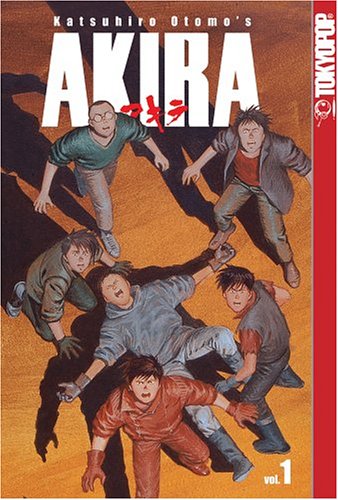 This "cine-manga" adaptation of the animated film is an odd beast. The film was adapted from Otomo's lengthy comic book series of the same name, making this new five-book series a kind of reverse adaptation. The format consists of animation cels cut up and arranged with word balloons in order to resemble comic book panels. The story takes place in 2019. A gang of troublemaking kids in postapocalyptic Neo-Tokyo, led by Kaneda, runs into a mysterious child with powerful psychic abilities. This draws them into the top-secret Akira project, an entanglement that resonates deeply in the personal lives of Kaneda and company, as well as the fate of the entire world. In both comic book and film form, is one of the most compelling science fiction tales of recent years, full of remarkable imagery, both drawn and animated, and real human pathos. Although this version retains the originals' spirit originals, it's missing the dynamics that made them work: the comic's depth of character and detail, and the film's tremendous momentum and innovative animation. In fact, the most captivating aspect of this volume is its strange attempt to make itself resemble a comic book through cropping the cels, yet staggering them in inventive layouts to imitate the film's pacing. But this approach to storytelling never transcends the pervasive feeling of borrowed imagery, so it fails to take on a life of its own. Furthermore, the book's production isn't as sharp as it could be: the cels are frequently blurry, and the color, so vibrant onscreen, is washed out.