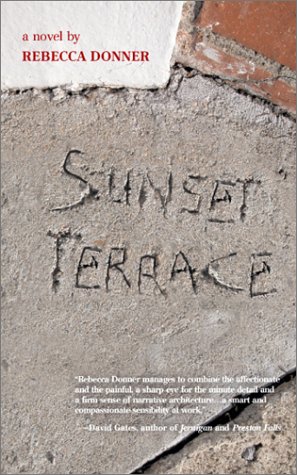 A family puts down roots in a hardscrabble Southern California apartment complex in this colorful, wonderfully realized first novel. Elaine is an itinerant restaurant cook who travels from town to town after her husband commits suicide, with her daughters, nine-year-old Hannah and Hannah's little sister, Daisy, in tow. In the summer of 1983, she finally decides to settle on the outskirts of L.A., taking an apartment in a dilapidated complex called Sunset Terrace, where Hannah meets Bridget, a notorious troublemaker (best known for waking the neighborhood by shouting pornographic rhymes at the crack of dawn) who quickly becomes her best friend and a surrogate member of the family. Elaine gets a job at a nearby Italian restaurant, and the girls begin concocting a series of escalating pranks and schemes. Harried Elaine ignores several signs of impending trouble, absorbed as she is in her burgeoning relationship with Sam, a man she meets at a singles dinner. But family issues come back to haunt her when a vindictive neighbor calls children's services to report Elaine for her neglect of Hannah. It's not long before a budding rivalry between the two girls leads to tragedy. The climax is a bit melodramatic and disjointed, but Donner's finely observed portraits of the Sunset Terrace denizens (a Bible-thumping, saccharine, aggrieved mother of four; Bridget's impassive, wigged, Virginia Slims–smoking foster mother, who fascinates and terrifies Hannah) show a rare gift, perfectly capturing both the era and milieu.