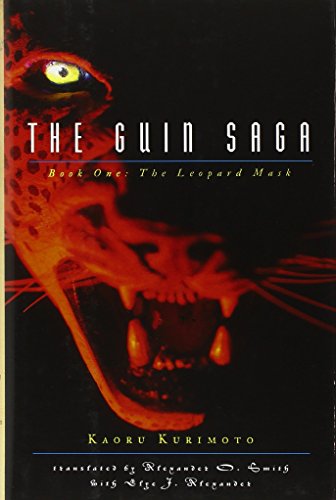 THE GUIN SAGA: Book One: The Leopard Mask

Originally published in 1979 and the first of a planned 100 books in the series (87 of which have already appeared in Japan), Kurimoto's fantasy provides plenty of straightforward action and adventure. Guin, a man with no memory, has the highly trained body of a warrior, the reflexes and fighting style of a large cat and, mysteriously, the mask of a leopard firmly fixed over his head. After the duchy of Mongaul invades the kingdom of Palos, Guin rescues the regal preteen "twins of Parros," Rinda and Remus, from a Mongaul patrol pursuing them through the Forest of Rood. Guin and the headstrong twins band together to fight their mutual enemies, but Janos, the weaver of fate, has other plans for them. They end up as prisoners of Count Vanon of Stafolos Keep, who has a curious wasting disease and an evil miasma about him. Kurimoto has launched a rousing tale of intrepid heroes, horrid villains and wicked supernatural creatures. A fast read with hardly any internal reflection on the characters' part, this book will probably appeal most to young adults.