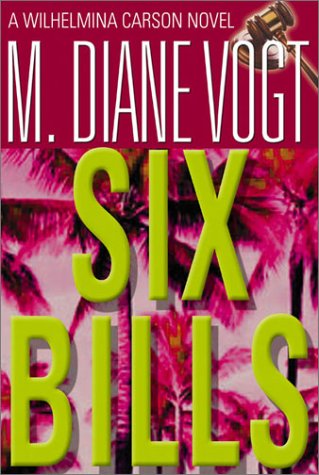 Tampa's crime-solving federal judge Wilhelmina Carson uncovers the secrets of a Woodstock-era band, the Six Bills, in Vogt's (, etc.) fast-paced legal thriller. When pop star Harris Steam persuades the judge to reopen the case of his mother, Billie Jo Steam, convicted of murdering her bandleader husband in 1972, Willa secures Billie Jo's release from prison only to hear later that Billie Jo in turn has been murdered and Harris is the chief suspect. Vogt surrounds her judging sleuth with a clever and capable supporting cast, including her TV journalist friend, Ursula, who happens to be married to an ex-Six Bill; police chief Benjamin Hathaway; and her indispensable new assistant, Augustus Ralph. Vogt's energetic prose bristles with office banter and social musings, when Willa isn't ducking phone calls from her disapproving chief judge or negotiating with lawyers reluctant to reach a settlement in her courtroom. Unlike most of her sisters in crime, Willa leads an elegant life, her home a Victorian mansion above her husband's gourmet restaurant. The Six Bills, however, never emerge as more than the images of the newsreels of the time, while the second murder proves even less convincing than the first. Still, Vogt presents a challenging enough puzzle to engage her appealing heroine and keep readers waiting for the next Willa Carson mystery.