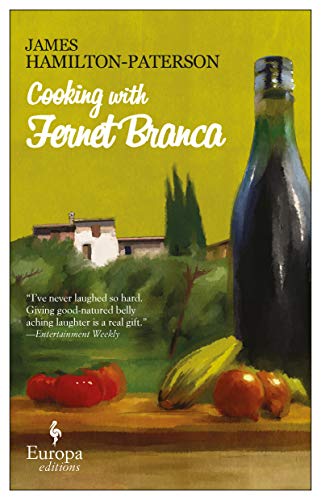 Usually writers taking a holiday from their serious work will use a pseudonym (DeLillo as Cleo Birdwell), but British novelist Hamilton-Paterson ( , etc.), who lives in Italy, bravely serves a very funny sendup of Italian-cooking-holiday-romance novels, without any camouflage. Written from the alternating perspectives of two foreigners who have bought neighboring Tuscan houses, the book has no plot to speak of beyond when-will-they-sleep-together. Gerald Samper is an effete British ghost writer of sportsperson biographies (such as skier Per Snoilsson's ); neighbor Marta is a native Voynovian (think mountainous eastern bloc) trying to escape her rich family's descent into postcommunist criminality—by writing a film score for a "famous" pornographer's latest project. Each downs copious amounts of the title swill and carps at the reader about the other's infuriating ways: Gerald sings to himself in a manner that Marta then parodies for the film; Gerald relentlessly dissects the Voyde cuisine Marta serves him, all the while sharing recipes for his own hilariously absurd cuisine. Rock stars, helicopters, the porn director and son, and Marta's mafia brother all make appearances. The fun is in Hamilton-Paterson's offhand observations and delicate touch in handling his two unreliable misfits as they find each other—and there's lots of it.