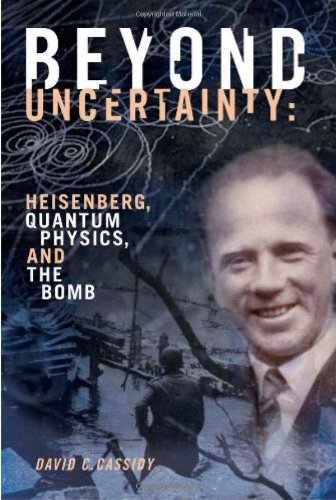 Beyond Uncertainty: Heisenberg, Quantum Physics, and the Bomb

Drawing on captured Nazi documents found in Soviet archives and other recently released materials, Cassidy ( ) offers a new view of the German wunderkind Werner Heisenberg (1901–1976), who won the 1932 Nobel Prize in physics for revolutionizing the nascent field of quantum physics, first with his matrix interpretation of quantum mechanics, then with his famous uncertainty principle. What Cassidy seeks to understand is why Heisenberg chose—indeed fought—to remain in Germany under the Nazi regime and then took a leadership role in its efforts to split the atom. Heisenberg later rationalized these activities, but Cassidy shows that the account in the scientist’s memoirs doesn’t always agree with evidence in the recovered documents. Heisenberg’s famous wartime meeting with his one-time mentor Niels Bohr in Copenhagen is parsed in detail as Cassidy considers their conflicting accounts. Exhaustively detailed yet eminently readable, this is an important book, though it moves too quickly through Heisenberg’s 30 postwar years. Photos.