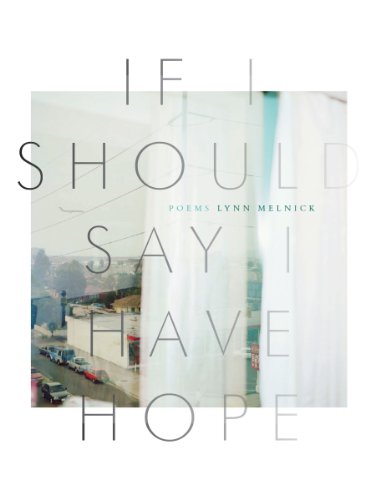 If I Should Say I Have Hope

Demandingly charming, consistently unpredictable, Melnick’s debut asks for notice at first for its language, whose glitter casts Melnick as both sophisticate and ingénue, “gleaming with what I wanted/ to be.” Its surfaces place her firmly in this century, far from the transparencies of memoir, and yet, on rereading, subjects emerge—principally a Southern California adolescence in part imagined, in part misspent. “I rarely knew where I was going/ when I shut the door of whoever’s car,” says a poem called “Superstar Hollywood Home Tours.” Color-saturated, ornate, and personal, distinguished by short exclamations and long titles, flirtatious as often as introspective, Melnick evokes a line of elaborate American voices, from Matthea Harvey to Hart Crane, casting herself as “starlet on the landing, overlooking sea-level,/ eclipsing occasion.” Consistent in her rapid free verse, her contemporary wordings, Melnick finds variety in her sentence shapes as well as her topics (a road trip, Yom Kippur, Lake Tahoe). Her volubility, as well as her verbal intelligence, makes the collection a pleasure indeed, even as it warns us against ourselves: “You wouldn’t know happy if it kissed you on the mouth.” (Sept.)
close
Details