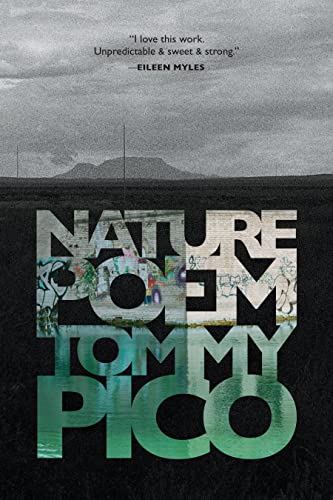 Pico (IRL) centers his second book-length poem on the trap of conforming to identity stereotypes as he ponders his reluctance to write about nature as a Native American. This is “fodder for the noble savage/ narrative,” he writes as ignorant people ask, “do I feel more connected to nature/ bc I’m NDN.” Other similarly problematic expectations are wryly discussed: “An NDN poem must reference alcoholism, like// I started drinking again after Mike Brown and Sandra Bland and Charleston/ I felt so underwater it made no sense to keep dry.” As an extension of this dilemma, Pico poses questions about what is natural human behavior: Is it natural for a football player to assault his girlfriend? Is colonialism natural? What about the feeling one gets while listening to Beyoncé’s “Mine”? Pico’s alter-ego “Teebs” remains in constant motion, leaping from the dentist’s office to drag queen karaoke night to the movie theater: “I’m an adult I only let myself have/ candy at the movies/ so I’ve been going to the movies A LOT.” In making the subliminal overt, Pico reclaims power by calling out microaggressions and drawing attention to himself in the face of oppression, “the way the only thing more obvious than your body/ is leaving yr shirt on in the pool.” (May)

This review has been corrected. A previous version stated that the author is represented by Lauren Smythe of Inkwell, but he is no longer represented by an agent.