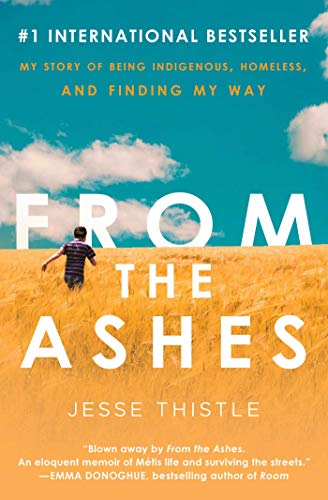 From the Ashes: My Story of Being Indigenous, Homeless, and Finding My Way

Thistle traces his path from neglected child, then homeless addict, to lauded academic in his powerful debut. Born in 1976, he grew up in Saskatchewan in a volatile household after his mother left him and his older brothers in the care of their alcoholic father. “[A] brash troublemaker,” Thistle struggled in his studies, and after high school became addicted to alcohol and crack and ended up on the streets of Vancouver, where he’d “never seen such squalor.” The sections about this time are particularly grim, including a startling depiction of Thistle being stabbed in the face. Scarred both physically and mentally, Thistle at one point was so desperate that he attempted to rob a store by pretending that a submarine sandwich was a gun (“I thought, This has got to be the worst moment of my life”). After calling the cops on himself, he went to jail and eventually got clean in rehab. In his mid-30s, he became a student at Toronto’s York University where he now teaches Métis studies. Thistle’s judicious use of his own poetry between chapters captures his deep suffering (“i swill back the pain; it burns and it belches rage and despair”) and underscores how he ended up one of the lucky few to emerge from what he endured. Readers will be gripped. (June)

Correction: An earlier version of this review misstated that the author was at one point addicted to heroin.