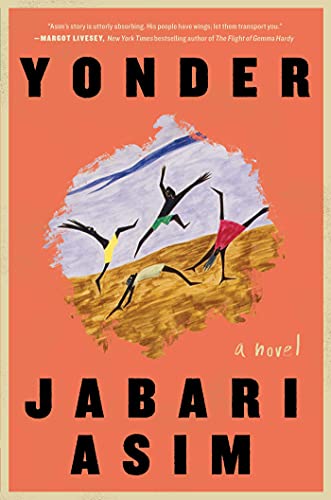 Novelist and cultural critic Asim (We Can’t Breathe) delivers a searing and redemptive story of slavery and survival. Set in the antebellum South, it is narrated primarily by enslaved people who call themselves the “Stolen” and white people “Thieves.” To sustain themselves through the cruelties of their owner, Cannonball Greene, a philandering pseudo-intellectual planning a study of Africans in America, the Stolen rely on their rituals and bonds. Inspired by myths of the Buba Yalis, Zander, a teen, believes he will one day fly like his African ancestors. Cato eases the shattering grief of his lover’s death by adding her name to the seven words chosen by the elders for each Stolen at birth, in the belief that “words were mighty enough to change [their] condition.” William doubts the power of all words, trusting action instead. When he stops Cupid, the plantation’s slave foreman, from bullying Zander one night, the two men fight. Cato steps in and kills Cupid, then helps William bury him in the woods. Faced with Greene’s rage, the others, heeding the promises of freedom offered by an itinerant Black preacher, consider a risky escape. Asim convincingly portrays what W.E.B. Du Bois would later term “double consciousness” among the Stolen: “All of us have two tongues,” an unnamed Stolen says, distinguishing between the “lament cloaked in deception” used for their enslavers and the rich, transgressive language used among themselves. At once intimate and majestic, the prose marries a gripping narrative with an unforgettable exploration of the power of stories, language, and hope. With a bold vision, Asim demonstrates his remarkable gifts. Agent: Joy Harris, Joy Harris Literary. (Jan.)
close
Details