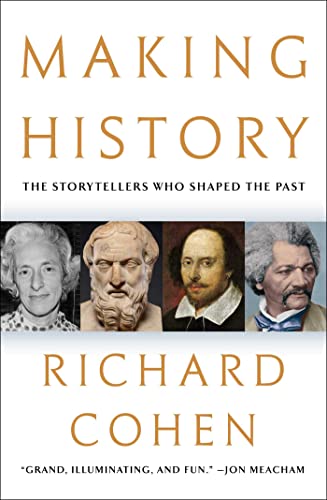 Making History: The Storytellers Who Shaped the Past

Cohen (How to Write Like Tolstoy), former publishing director of Hodder & Stoughton in the U.K., demystifies the act of history-making in this sweeping survey. He documents how European history was shaped by Greek philosophy, Roman mythology, and Judeo-Christian theology and formalized as a discipline by 19th-century German scholar Leopold von Ranke and others. Along the way, he profiles noteworthy historical figures including Isaac ibn Yashush, a Jewish physician living in 11th-century Spain who cataloged inconsistencies in the Pentateuch, and Marc Bloch, a historian turned French Resistance fighter who was executed by the Nazis in 1944. Elsewhere, Cohen examines academic debates over the ethical limits of revisionist history, analyzes the influence of cinema and digital technologies on historical scholarship, and compares ancient historians such as Thucydides and Herodotus, who “wrote to be read aloud,” with Hamilton playwright Lin-Manuel Miranda. Though the biographical minutia threatens to overwhelm, Cohen makes a persuasive argument that history is created by historians as much as by politics, war, economics, and other forces, and convincingly shows how “the rivalries of scholars, the demands of patronage, the need to make a living, physical disabilities, changing fashions, cultural pressures, religious beliefs, patriotic sensibilities, love affairs,” and other human concerns have shaped the understanding of the world. The result is a fascinating and finely wrought history of history. (Mar.)
close
Details