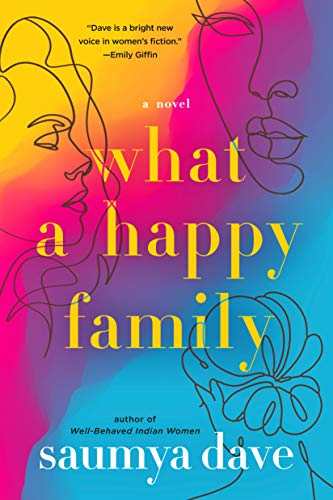 What a Happy Family

Psychiatrist Dave’s revelatory latest (after Well-Behaved Indian Women) focuses on a Desi family affected by cultural pressures in an Atlanta suburb. Shortly after Natasha Joshi, middle child and outspoken black sheep, is fired from her job, she refuses her boyfriend’s proposal, causing his traditional mother to snub Natasha’s mother, Bina, her longtime friend. Natasha pursues a career in comedy but can’t stop freezing up during improv, and, unable to please herself or her family, she spirals into depression, which goes unnoticed by her older sister, Suhani, a successful shrink with impostor syndrome. Suhani, meanwhile, is gunning for a spot as a chief resident and discovers that her cruel ex now works at her hospital and might have a say in her future—but can’t bear to tell her husband the whole story, and her unwillingness to share makes him question their marriage. Meanwhile, Bina starts a group to discuss women’s issues and is criticized in an influential newspaper. The narrative is thoroughly propulsive, and Dave writes intelligently about the universality of shame, disappointment, and living to please others while simultaneously sharing the unique experiences of a first-generation Desi family. Though an important plot point hinges on coincidence, the stellar character-driven storytelling makes it easy to look past it. This rings true from start to finish. (June)
close
Details