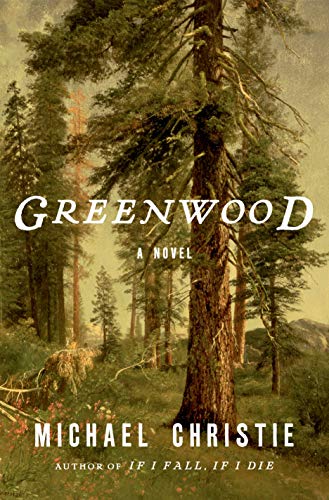 Christie’s rugged, riveting novel (after If I Fall, If I Die) entwines a family’s rising and falling fortunes with Canada’s dwindling old-growth forests. In a frightening, nearly treeless 2038, 33-year-old dendrologist Jacinda “Jake” Greenwood guides tourists on a British Columbia island where a rare forest withstood the global environmental disaster and ensuing economic collapse known as the Great Withering. While Jake worries about spots appearing on two fir trees, her ex-fiancé, Silas, now a lawyer, informs her she could inherit a large sum from the Greenwood estate. Orphaned at age eight, Jake knows little about her family, and the more she learns through reading her grandmother’s journal, the less she wants the money. Her father, Liam, was a carpenter and gifted woodworker. Liam’s mother, Willow, was the ecoterrorist daughter of lumber tycoon Harris Greenwood. Willow, though, was not Harris’s biological daughter. Abandoned as a baby, she was rescued by Harris’s brother Everett and entrusted to Harris for safekeeping. Nor were Harris and Everett biological brothers; they were survivors of a train wreck who were raised together by a lumberjack’s widow and given the name Greenwood. Christie recounts each generation’s story through concentric flashbacks in which families, like forests, experience both devastation and renewal, anchored in Jake’s recognition that she’d rather inherit the earth than a fortune derived from its destruction. This superb family saga will satisfy fans of Richard Powers’s The Overstory while offering a convincing vision of potential ecological destruction. [em](Feb.) [/em]
close
Details