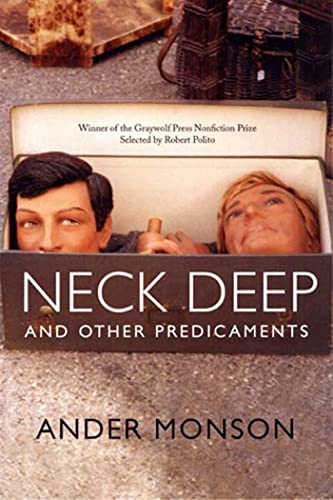 Neck Deep and Other Predicaments

This esoteric collection, awarded the second annual Graywolf Press Nonfiction Prize, is described by contest judge Robert Polito as â€œastonishing,â€ a â€œdismantling and reinvention of the essay as an instrument for thought.â€ Readers are bound to agree; in his first nonfiction book, poet and novelist Monson ( ) offers a parade of quirky, at times avant-garde methods for exploring his obsessions with everything from Frisbee golf (â€œThe Long Crushâ€) to car washes (â€œThe Big and Sometimes Colored Foam: Four Annotated Car Washesâ€) to the lost art of sending telegrams (â€œAfterword: Elegy for Telegram and â€). He pits working-class values against those of Michigan's suburban upper crustâ€”grappling with his own point throughoutâ€”in â€œCranbrook Schools: Adventures in Bourgeois Topologies,â€ an ironic, seminostalgic look at his preexpulsion years in an elite boarding school. In â€œOutline Toward a Theory of the Mine Versus the Mind and the Harvard Outline,â€ a well-crafted outline unpacks the history of mining in northern Michigan. â€œIndex for X and the Origin of Firesâ€ is perhaps the best of the bunch; Monson explains it in his notes as â€œthe original index to my novel, , before it was trimmed out and became this something else. One hopes it still refers to a (or the) recognizable world.â€ Wonderfully recondite and cunningly executed, Monson's work will make a brilliant discovery for open-minded fans of narrative nonfiction