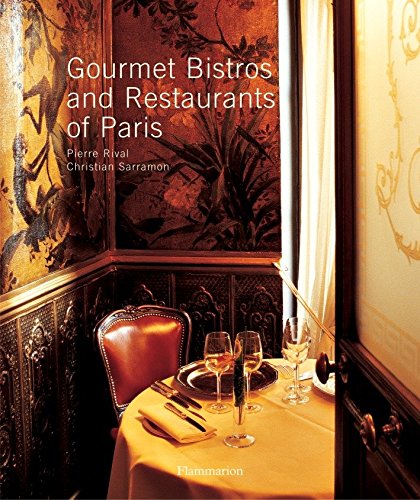 Gourmet Bistros and Restaurants of Paris

Despite an introduction touting Parisian gastronomy and its two defining styles ( and ), there's little evidence of such fare in these pages. Rather, the authors of this illustrated volume dote on décor, which is, admittedly, magnificent in most cases. Examples of art nouveau and art deco mingle with illustrations of contemporary design and a "post-historic" style that mixes old and new, as Rival and Sarramon, who coauthored the more scintillating , showcase more than 100 dining establishments in the City of Lights. The scenes are no doubt beautiful: a glimmering chandelier with several hundred glass drops illuminates a room at the restaurant at the Plaza Athénée; the quintessentially French bistro L'Ami Louis looks like a set straight out of ; art deco fabulousness infuses La Coupole, with the work of Fernand Léger and others decorating the pillars in the dining room. Yet for all the photographs' attractiveness, they feel oddly hollow: patrons are scant, bustling waiters nonexistent. Ample text accompanies the images, giving a crash course in Parisian history seen through its restaurants. Design aficionados will eat this up; foodies, meanwhile, will require more sustenance. 180 color photos.