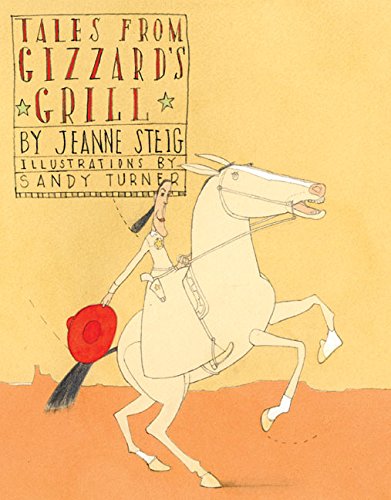 This mock-epic Western, told in rhyming text as long as the noonday sun is high, chronicles events in the dusty town of Fiasco. In three tales, loners amble into the local hangout, Gizzard's Grill, and forge unlikely friendships. "The Lonesome Cowboy" tells how a mustachioed stranger unnerves the Sheriff, a fierce woman known by her six-shooter and scarlet ten-gallon hat. "You see this badge I'm wearin'?/ It ain't just foofaraw./ For in old Fiasco town, my boy,/ I represent the Law," she warns. But the newcomer gains her respect by baking biscuits and nabbing a horse thief, who turns out to be a nice guy, too. "Miss Lou-Lou" introduces a snake-oil salesman and his daughter, who's an ace with the dowsing rod when the well goes dry. "The Duel" presents a smelly feller who enters the Grill with a roar ("he sounded wild as ten wet cats") and challenges the townsfolk to a stinky-feet contest. Turner ( ) provides technical line drawings in pencil against sun-baked, sandstone-colored backgrounds. His brainy but remote cartoons complement the text's peculiarity but convey little warmth. Steig ( ) composes drawling, quirky four-line stanzas, recalling both the Ancient Mariner and the Jabberwock. She experiments with storytelling style, but unfortunately the meandering verses and uninviting visuals may test readers' patience. All ages.