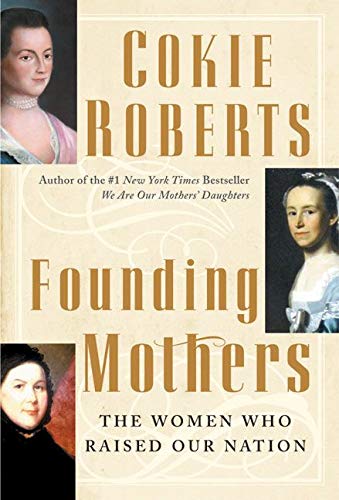 FOUNDING MOTHERS: The Women Who Raised Our Nation

ABC News political commentator and NPR news analyst Roberts didn't intend this as a general history of women's lives in early America—she just wanted to collect some great "stories of the women who influenced the Founding Fathers." For while we know the names of at least some of these women (Martha Washington, Abigail Adams, Eliza Pinckney), we know little about their roles in the Revolutionary War, the writing of the Constitution, or the politics of our early republic. In rough chronological order, Roberts introduces a variety of women, mostly wives, sisters or mothers of key men, exploring how they used their wit, wealth or connections to influence the men who made policy. As high-profile players married into each other's families, as wives died in childbirth and husbands remarried, it seems as if early America—or at least its upper crust—was indeed a very small world. Roberts's style is delightfully intimate and confiding: on the debate over Mrs. Benedict Arnold's infamy, she proclaims, "Peggy was in it from the beginning." Roberts also has an ear for juicy quotes; she recounts Aaron Burr's mother, Esther, bemoaning that when talking to a man with "mean thoughts of women," her tongue "hangs pretty loose," so she "talked him quite silent." In addition to telling wonderful stories, Roberts also presents a very readable, serviceable account of politics—male and female—in early America. If only our standard history textbooks were written with such flair! 7 illus. not seen by .