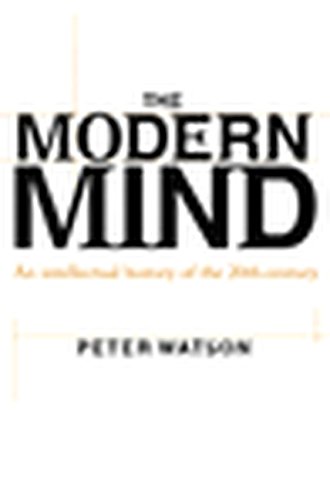 THE MODERN MIND: An Intellectual History of the 20th Century

Just as the 20th century dawned with an unparalleled optimism regarding the moral, social and scientific progress of humanity, it ended with an unshakeable confidence in the promises of technology and the power of free-market economics to deliver a better life for all humankind. British journalist Watson's (; ; etc.) panoramic survey traces various 20th-century ideas and their power to bend and shape society and individuals. At a frenetic pace, he gallops through the modern intellectual landscape, pausing long enough to graze the founts of philosophy (from Wittgenstein to Richard Rorty to Alasdair MacIntyre), literature (Kafka, Woolf, Mann, Rushdie), literary criticism (F.R. Leavis to Jacques Derrida), art (Picasso to Warhol), economics (Milton Friedman to John Kenneth Galbraith), science (Linus Pauling to E.O. Wilson) and film (D.W. Griffiths to François Truffaut). He also briefly examines the significance of a wide range of political and cultural movements, such as socialism, communism, fascism, feminism and environmentalism. Watson's rich narrative covers every corner of intellectual life in the 20th century, yet the style is so breezy and anecdotal that it lacks the deep learned elegance of a history of ideas by, for example, Isaiah Berlin or Jacques Barzun. Unfortunately, for all the book's breadth, Watson's workmanlike approach has the feel of a handful of school assignments cobbled together from encyclopedia articles rather than of work drawn from years of thoughtful reflection and an intimate acquaintance with, and love of, ideas.