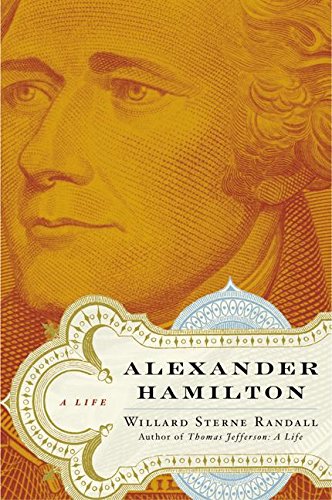 Biographer of Washington, Jefferson and Franklin, Randall is in his usual engaging form in dealing with the complex Hamilton, who in 1804 died in a duel with Aaron Burr. Creating a bigger-than-life hero, Randall sometimes strains credibility in the interest of color, and the evidence of occasional unreliability is exposed by gaps in documentation or in attributions like "according to tradition." One quotation credited to a Tory historian of the Revolution describes an American gallows erected near Charleston harbor, where "twenty-four reputable Loyalists [were] hanged in sight of the British fleet, with the army and refugees on board." In Randall's pages the close of the quotation is altered incredibly to "the army and thirty-five thousand Loyalists looking on." Randall's restless Hamilton, illegitimate son of a West Indian Englishwoman, succeeds on his energy, industriousness and intelligence, and a little help from distant relatives, becoming the new nation's first Secretary of the Treasury at 34. As a New York lawyer, aided by a loveless but lucrative marriage, he scrambled for riches before becoming a power behind the scenes in the federal government, then by Cabinet appointment. Even after Hamilton's resignation at 40, he is described, too sweepingly, as "a sort of unpaid prime minister in absentia," even though he was disgraced by two adulterous affairs, one with his wife's sister. Most of Randall's narrative is vivid and accurate, but the rest should give the reader pause. Eight pages b&w illus. not seen by