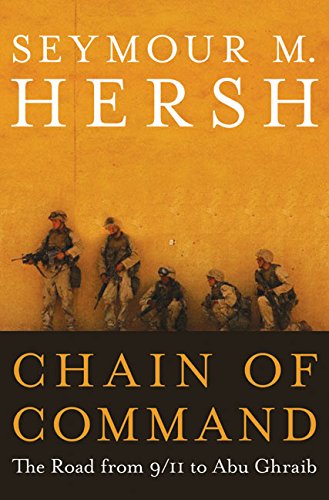 Chain of Command: The Road from 9/11 to Abu Ghraib

Based on previously published articles and supplemented by fresh revelations, this book by Pulitzer Prize-winning investigative reporter Hersh, who writes for The New Yorker and has authored several books (The Dark Side of Camelot, etc.), charges the Bush administration with being propelled by ideology and hamstrung by incompetence in Iraq, Afghanistan and other areas. One former intelligence official observes that the Bush administration staffers behaved ""as if they were on a mission from God,"" while another laments, ""The guys at the top are as ignorant as they could be."" It's no surprise, then, that the dissenters want to talk or that the Hersh, who has a reputation for integrity and enviable inside access, ferrets them out, assembling critiques from diverse, mostly unidentified sources at home and abroad. According to Hersh, the dire conditions that ""enemy combatants"" suffered at Guantanamo Bay, Cuba, presaged detainee abuses at Baghdad's Abu Ghraib prison. Hersh reveals the depravities purportedly occurring at Guantanamo and argues that Donald Rumsfeld wasn't the only one responsible for what happened at Abu Ghraib: ""the President and Vice President had been in it, and with him, all the way."" The book also covers some familiar ground, exploring pre-9/11 intelligence oversights and the administration's misconception that Saudi Arabia, Syria, Iran, Israel, Turkey and the Kurds would jump on the democracy bandwagon after the invasion of Iraq. But Hersh reserves his sharpest words for President Bush, suggesting the ""terrifying possibility"" that ""words have no meaning for this President beyond the immediate moment, and so he believes that his mere utterance of the phrases makes them real."" Hersh's critics may dismiss these explosive, less than objective conclusions. For others, however, this sobering book is the closest anyone without a security clearance will get to operatives in the inner sanctums of America's intelligence, military, political and diplomatic worlds.
close
Details