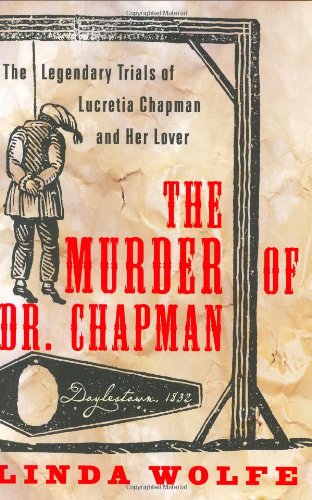 THE MURDER OF DR. CHAPMAN: The Legendary Trials of Lucretia Chapman and Her Lover

"Murder was the favorite subject [of books and newspaper stories], and... murders that took place within the privileged class excited the greatest interest," writes Wolfe in this fascinating historical re-creation of an early 19th-century scandal. Lucretia Chapman, a wife, mother and headmistress of a boarding school near Philadelphia, and the man who called himself Lino Espos y Mina, a sociopathic liar who was the catalyst for her husband's murder, are as colorful characters as one is likely to find in true crime tales. Lino, in particular, seems to defy the laws of rationality. He turned up dirty and penniless at the Chapmans' door, boasting that he was the aristocratic son of a Mexican general who was governor of California, and was heir to gold and silver mines in his native country. Dr. William Chapman, a noted scientist, had doubts about the man who henceforth boarded with them, but Lucretia fell under his spell and soon became Lino's lover. After two years, Lino either poisoned Dr. Chapman himself or inspired Lucretia to do so. Nine days later, he married the supremely gullible Lucretia, who continued to believe his outrageous stories about why his money never arrived. Eventually arrested for murder, Lucretia and Lino were given separate trials. In a demented act of vengeance, Lino viciously maligned Lucretia with newly invented lies in a memoir he wrote before he was hanged, thus making him one of the first people in America to try to make money by publicizing his criminal activities. Wolfe's assiduous research has re-created the background and trial events in specific detail—she acknowledges the essential help of a contemporary (1832) book chronicling the trial by William Du Bois. Wolfe ( ) has always been a keen observer of contemporary true crime; here she has delved deeper into history to disinter a quintessential con man who cut a wide swath along the eastern seaboard among people eager to believe they were in the presence of royalty.