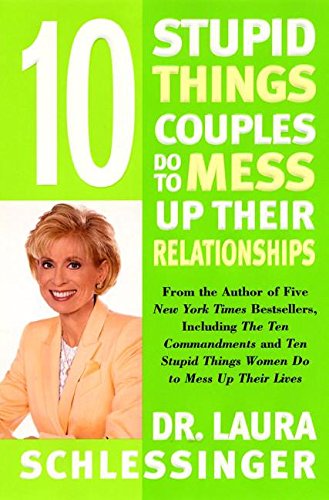 10 STUPID THINGS COUPLES DO TO MESS UP THEIR RELATIONSHIPS

Schlessinger once again pontificates on the values, behaviors and flaws that ruin lives and society. Dr. Laura is well-known for her caustic advice on her syndicated radio show and in previous books. Never a believer in the proverbial spoonful of sugar, she pummels readers with judgments and instructions for dating and marriage. With many quotations from listeners, Schlessinger gives a tongue-lashing to "stupid" secrets, egotism, pettiness, power, excuses, etc. She offers rational (if familiar) counsel to honor commitments, treat partners and relationships respectfully, communicate, accept differences and make some compromises, but she exhibits not a trace of empathy or humility. She never substantiates broad generalizations that "feminist propaganda" and "ultraliberal... " have yielded an "amoral" and "ego-loving society," neglecting to cite sources for vague "studies." She writes, "I get very angry when spouses call feeling guilty for wanting to get out of bad relationships," forgetting that, as a counselor, feelings don't much matter. Frozen in some pre- time, she advocates chivalry, alleging, "it's getting more and more difficult for a man to find a woman he can respect." Although not a medical doctor or addiction counselor, Schlessinger rejects the concept of addiction as disease, blaming it on poor "character." People seeking a self-help alternative to touchy-feely or moral-relativist philosophies should avoid this harsh, self-indulgent tirade.