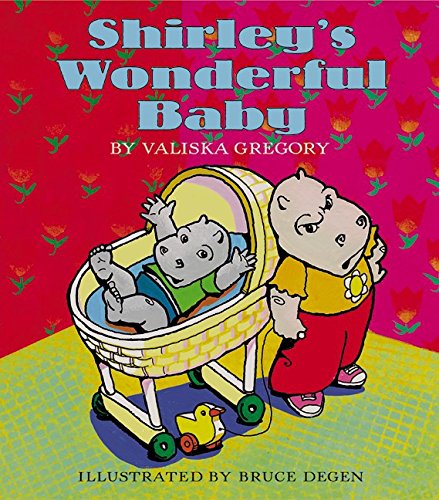 Shirley the hippo thinks it's about time to send her new brother, Stanley, back where he came from ("The trouble with Shirley's new baby brother was that everything Stanley did was wonderful"). She's had enough of his attention-grabbing spitting, drooling, babbling and smelly diapers. But gradually Shirley undergoes a change of heart, thanks to a clever new babysitter, Ms. Mump. Announcing, to Shirley's delight, that "I like my tea with two lumps of sugar and babies," Ms. Mump mirrors Shirley's resentment by disparaging babies in general ("Babies are notorious for getting into trouble"), while at the same time maneuvering Shirley into defending her brother. The resourceful woman also nurtures Shirley's sense of competency and importance by asking her to take over such chores as feeding, burping and diapering her infant sibling. Gregory () gets the arch tone just right, and it grows warmer as Shirley's affection deepens. The author also understands how a word like "notorious" (used judiciously, several times) can be like a feather tickler to readers' burgeoning vocabulary. Similarly, Degen's () artwork subtly follows the heroine's transformation: his thick black line allows for understated facial expressions as well as dramatic body language. The mixture of patterns and textures draws in readers, while the saturated colors provide the immediacy and punch of the unfolding changes in Shirley. Ages 3-7.