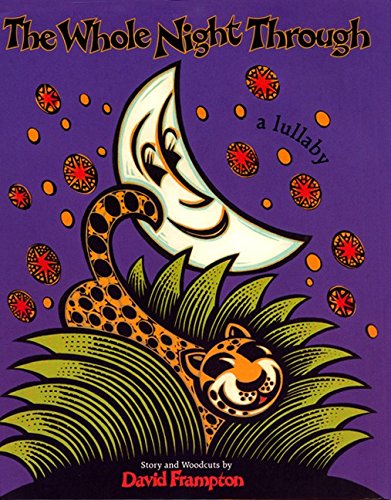 THE WHOLE NIGHT THROUGH: A Lullaby

In the first book he has written as well as illustrated, woodcut artist Frampton () offers up a delightfully cheeky jungle-themed bedtime serenade. A determinedly wide-eyed leopard cub acts as the jubilant narrator, guiding readers through the exotic night landscape: "The rhino nestles in his bed/ an egret perched upon his head/ the crocodile is sleeping too/ the kinkajou/ the cockatoo/ They're sound asleep across the land/ If you're not sleepy raise your hand!" As the playful leopard continues his slumberland census, readers are treated to a visual feast of vibrant, elegantly graphic woodcut animal portraits, each one set against a background of royal purple. For the most part, the interior illustrations outdo the cover art in their complexity and sophistication. Frampton delineates a dozing monkey "dreaming of bananas" in swooping arcs, and renders his fur in patterns of triangles that bring to mind an elaborate tribal tattoo; a snake ("sleeping peacefully/ like ribbon candy in a tree") is a swirl of fluorescent red and blue stripes, giving his skin the appearance of a time-delay photograph of nighttime traffic. It's hard to believe the leopard could succumb to sleep after so many pages of visual fireworks, but he does—what's more, he persuasively argues that it's time for his readers to get some shut-eye, too. Ages 3-6.