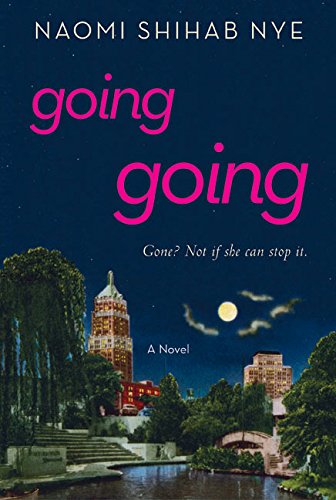 Readers who cherish historic buildings and traditions will feel a strong kinship to the highly motivated Texas teen at the center of Nye's ( ) novel, who wants her distaste for large franchise establishments known. On her 16th birthday, Florrie starts a campaign, urging family members, friends, classmates and citizens of San Antonio to boycott business chains and begin frequenting locally owned shops and restaurants such as her mother's Mexican diner, El Viento. (The girl "loved old things in a way that even she could not understand.") Leading demonstrations and protests against such establishments as Wal-Mart, Florrie makes her voice heard, gains publicity for her cause and in doing so, piques the interest of a cute boy, Ramsey, whose father ironically manages a Marriott. While the novel succeeds in showing that one person can make a difference, readers may be a bit disappointed that Florrie's relationships with the other characters are not as well developed as her passion for saving small businesses. Her brief romance with Ramsey is sketchily defined as are her feelings for an old flame, Zip, who is always ready and willing to lend a helping hand and sympathetic ear. While the author hints that there is more to Florrie than meets the eye, only one side of the heroine is thoroughly explored, the side that abhors change and longs to preserve the past. Ages 12-up.