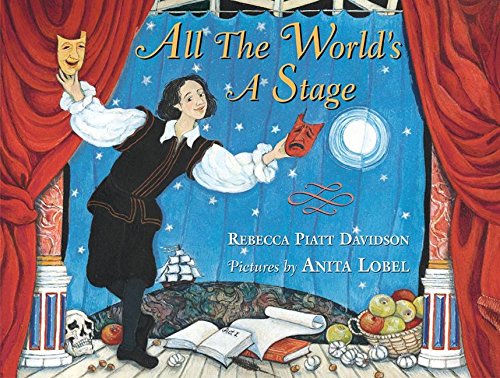 ALL THE WORLD'S A STAGE

A former English teacher, debut author Davidson raises the curtain on Shakespeare via a House that Jack Built–style catalogue of some of the playwright's most celebrated characters: "These are the twins/ In matching disguises,/ Courting and sporting/ All kinds of surprises…/ Amusing the muse/ Who sings to the boy/ Who stays up all night/ Writing poems and plays." (Characters remain unnamed until the endnotes, while the title of the relevant play appears on the facing illustration, along with a quote from that play.) The approach is problematic. The nursery rhyme scheme may turn off those who have newly mastered the skills with which to approach Shakespeare, while the text presupposes some acquaintance with the Bard. The volume does not retell any of the stories, and offers little to enhance an understanding of the works. Plus the beginning spreads confusingly mix the real-life playwright with his fictional characters. Lobel's () artwork, on the other hand, ranks among her best. Here she gleefully follows her own theater muse, staging dramatic montages of the famous plays (one per spread). The multi-leveled watercolors capture a true sense of "troupe," with exquisite period clothing and intricate set designs. For , for example, fairies, "woodfolk," royal observers and animals frolic onstage in a kaleidoscope of color and costume. Notes from both author and illustrator, as well as detailed keys to the paintings that identify all the characters represented, may make this an appealing curiosity for Shakespeare fans. Others may, unfortunately, just scratch their heads. Ages 5-up.