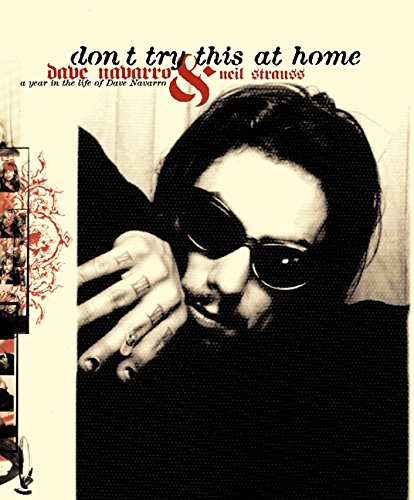 DON'T TRY THIS AT HOME: A Year in the Life of Dave Navarro

In a book originally scheduled for publication in 2001, rock guitarist Navarro (Jane's Addiction; Red Hot Chili Peppers) and rock journalist Strauss (coauthor of bestselling celeb autobios including Mötley Crüe's thrillingly crude , Marilyn Manson's and Jenna Jameson's ) chronicle the year Navarro turned his house into "a cross between a crack den, an after-hours club, a halfway house and Andy Warhol's Factory" to test his theory that "[t]he only people who stay in your life are the ones you pay." Navarro had had messy breakups with his girlfriend and his record label, and he'd decided to start using drugs again. He installs a photo booth and low-tech surveillance equipment to record every rock star, sycophant, drug dealer and prostitute who stops by his house. The book's 57 episodic chapters (some of which are simply transcripts) relate the demise of a relationship, drug overdoses and detoxes; they include Navarro's jokes about a "committed three-way relationship" and his pseudo-philosophical ruminations about the impossibility of romantic love for the emotionally challenged. Drug-addled chapters such as "Ten Ways to Tie Off" and photo strips of wacked-out, cosmetically enhanced women speak to a sort of quasi-glamorous, semisick, half-desperate pathos. Navarro's experiences turn out to be a lesson in accepting the "rainbow of emotions that come along with life," and there's even a happy ending, as he sobers up, restarts his career and gets married. Weirdly fascinating for a while, but ultimately for the fans. .