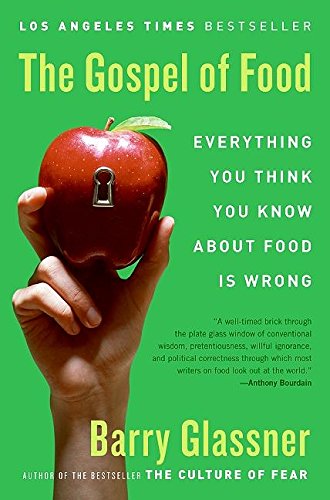 The Gospel of Food: Why We Eat the Way We Do

In his latest debunking project (after ), sociologist Glassner argues that "everything you think you know about food is wrong." And Glassner really does take on almost everything, from Atkins to vegans, with particularly hard jabs at those who, in the name of nutrition, take the fun out of food. This includes some well-known food writers, the manufacturers of "fat-free" foods, as well as "natural" and "organic" offerings—but surprisingly, he stands up for irradiated "Frankenfoods" and for some processed fast food. Later, he tackles the American obesity "epidemic." Here, too, he finds conventional wisdom more mythic than real, with so much conflicting evidence (the book is formidably researched and footnoted) that he finds himself wondering if obesity really matters and concludes that it probably doesn't, much. Only two conventional bits of wisdom survive Glassner's skeptical approach: the rich really are thinner than the poor, and four-star restaurant cooking really is delicious. Glassner's myth-busting information is useful, but at times he takes jabs in too many directions, losing narrative focus.