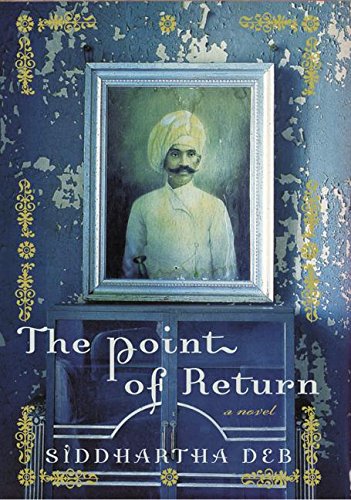 THE POINT OF RETURN

An "inept archeologist of memories" is how Babu, the narrator of Deb's elegiac debut novel, describes himself in this perceptive, if convoluted, tale about a generation gap between father and son in 1970s and '80s India. Babu's narrative unfolds in reverse chronological order as he tries to do justice to his father's life. Dr. Dam, a Hindu veterinary surgeon, has to flee his native Bengal when India is partitioned in 1947. He moves to a northern hill town in the state of Assam and becomes a civil servant, one of the few who is conspicuously upstanding in a corrupt postpartition bureaucracy where bribery and thievery reign. By the time Babu is born in 1970, Dr. Dam, now aged 44, has changed. He still has his old-fashioned rectitude (which Babu finds embarrassing) and Nehru-inspired ideals of national unity (which seem increasingly irrelevant as sectarian violence blooms), but he refuses to challenge the ineptitude around him. To Babu, Dr. Dam's servility in dealing with high-ranking, unrefined superiors smacks of a colonial mentality, remnants of his youth under the Raj. Babu learns much later about a long-ago pivotal incident in which his father felt duty-bound to reveal graft and paid a terrible price. Deb draws a sharp, memorable picture of the misunderstandings between father and son, exacerbated by rapid changes in India's political and cultural landscape. The structure of the narrative sometimes makes it hard to understand the chronology of events, but Deb convincingly shows how Babu comes to admire and mourn his father, and movingly dramatizes the immersion of individual lives in the flow of history.