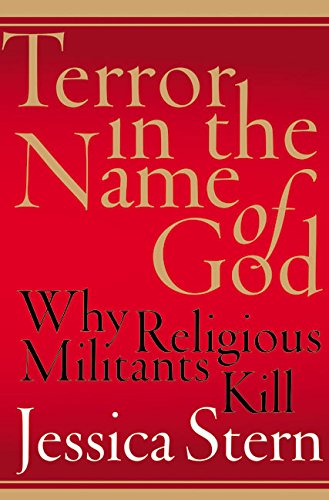 TERROR IN THE NAME OF GOD: Why Religious Militants Kill

Stern, a former fellow on terrorism at the Council on Foreign Relations (and the inspiration for Nicole Kidman's character in ), makes the issue personal by depicting her encounters with religious terrorists around the world. Her definition of "religious terrorism" is comprehensive, encompassing the growing Muslim jihad in Indonesia, militant Palestinians and zealous Israelis, and Americans who kill abortion doctors in the name of Christ. Given the opportunity to articulate their positions, these and other subjects surprise not by their vehemence but by their relative normality, making it all the more curious that many of them eventually elect to strike against their opponents with deadly force. Explaining the "how" therefore becomes as important as explaining the "why," and the book carefully outlines the ways in which militant leaders of all denominations find recruits among the disenfranchised and recondition them, often under cultlike conditions, stoking their zealotry to the point of suicide and murder. Coupled with additional research, Stern's firsthand encounters bring a valuable and much-needed perspective to the problem of religious violence, and she identifies several increasingly broad threats, including the extent to which many governments will tolerate or even sponsor militant religious groups to further their own political agendas. For all the material damage terrorist acts cause, Stern argues, we should understand religious militance as a form of psychological warfare, calculated to bolster the faithful and strike "spiritual dread" in the unbelievers; the most effective counterstrategy is thus not violence but nonviolent techniques such as psychological counterwarfare and the reaffimation of our own values.