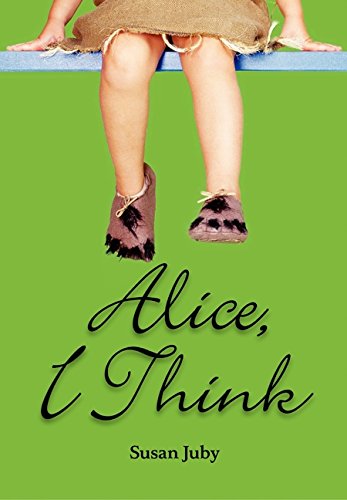 Revised from a 2000 work published in the author's native Canada, this very funny first novel makes use of the same pseudo-diary format as Louise Rennison's books, but where Rennison's heroine is Everygirl, Juby's is a misfit extraordinaire. Alice has been home-schooled by her aging-hippie parents since early childhood (catering to her fantasy that she is a hobbit, Alice's parents send her to first grade in a homemade outfit involving a burlap-sack tunic and felt slippers with fake fur on the toes, and don't understand why the teachers don't support Alice's self-expression). Now 15, Alice has caused the nervous breakdown of her counselor at the "Teens in Transition (Not in Trouble)" crisis center and feels obliged to do better by her counselor's replacement, a trainee whom Alice dubs Death Lord Bob for his sinister attire and for his "masculine" whispery voice (he sounds "like Clint Eastwood talking tough to the warden"). To help Bob with his considerable (and real) "issues," Alice finds herself setting goals, which include enrolling at the local high school and dreaming up a future career (cultural critic). Along the way, she tries out "alternative" clothing and gets the worst haircut ever, attracts boys even less together than herself, gets pummeled by the local bully—and utters acerbic aperçus that will have readers roaring. While Juby's novel stands out more for her narrator's voice than for its plot, her dark wit virtually glitters on every page. Ages 12-up.