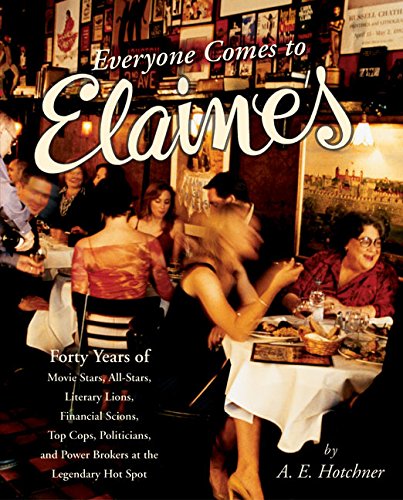 The daughter of working-class Jewish New Yorkers, Elaine Kaufman barely graduated from high school, but for some 40 years she has owned and managed one of the most exclusive nightspots in Manhattan: Elaine's. As Hotchner ( ) puts it, what "Rick's place was to Casablanca, Elaine's is to New York." Soon after Elaine bought the old neighborhood bar at 88th Street and Second Avenue in 1963, she welcomed writers as her favored clients, allowing them to run tabs and make her place their second home. Authors George Plimpton, Pete Hamill, Hotchner and others were among Elaine's earliest customers—but as word spread, the tables filled. After the writers came their agents and editors, and then glitterati of all persuasions. As Hotchner explains, the food has never been the point (sometimes it's quite inedible, he indicates). But the atmosphere is everything, and the atmosphere is pure Elaine. Young men just starting out could eat at Elaine's and find their first agent, sell their first play or be consoled over their first failures. As for young women, well, Elaine's nastiness was notorious, reports Hotchner. Writers' wives were treated, according to Nora Ephron, "as if they were temps." "Women were not welcomed at early Elaine's, except as décor," Jules Feiffer remarked. Why? Perhaps Elaine herself needed to be "the principal female attraction," as Gay Talese put it. Readers offended by Elaine's misogyny may savor the account, near the end, of her disastrous attempt to lose weight and get a husband. Hotchner isn't known for writing fluff, but this reads like an extended glossy magazine feature, dripping with famous names and celebrity photos, full of dish—but leaving readers with little appetite. Photos.