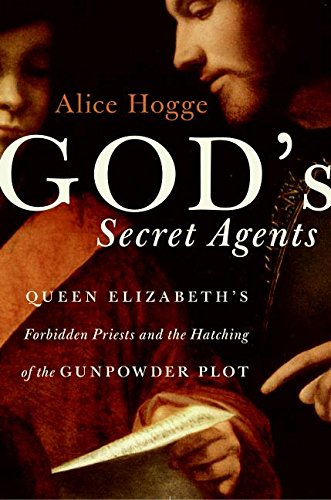 God's Agents: Queen Elizabeth's Forbidden Priests and the Hatching of the Gunpowder Plot

As historian Hogge points out in this sometimes dry and sometimes lively popular religious history, the impulse to return Catholicism to England in the latter part of the 16th century arose with the establishment of the Anglican Church. In the early days of her reign, Elizabeth instituted strict laws regarding church attendance and religious practice with punishments that included fines and death. By the time that James I ascended to the throne, persecution of Catholics had risen to such a pitch that a group of Catholic conspirators, including most famously Guy Fawkes, hatched a plot to blow up Parliament. Hogge provides a tantalizing glimpse into the lives of the priests—such as Edmund Campion, John Gerard and Henry Garnet—who made martyrs of themselves in their efforts to reinstate Catholicism in England. Hogge deftly narrates the seething world of religious conflict in late 16th- and early 17th-century England, as well as the intra-Catholic conflicts that arose in the face of persecutions by the throne. Anyone interested in vibrant details of the Gunpowder Plot will have to look elsewhere, since the event plays a small role in Hogge's book, but for a detailed sketch of the religious conflict that led to the plot, Hogge's book provides a starting point.