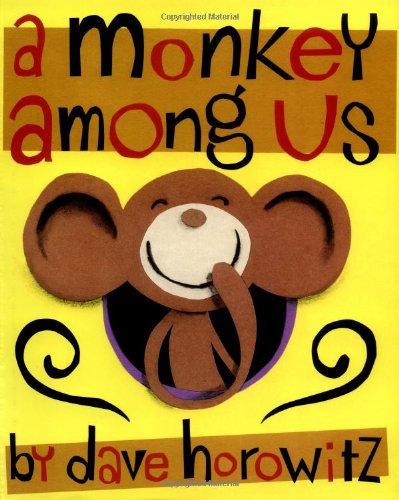 A MONKEY AMONG US

This charming picture book debut consists of four brief, rhymed vignettes that depict mischievous animals taking turns taunting a timid bowler-hatted human (who resembles a pauper cousin to Monopoly's rich Uncle Pennybags). In Horowitz's tale, the monkey on the man's back is no metaphor: the curious creature clings to the fellow, discovers a fungus (represented by silhouette images of mushrooms run riot) and, on the next page, the primate towers over the man and the typeface grows bulbous to demonstrate "a monkey humongous." Next, a hippopotamus "hops a bus" to Hippotropolis, where he occupies the now-vacant position on the man's back. The arrival of a scaly green monster (who stands sassily, hands on hips) sends everyone scurrying. But an empty costume box ("Awfully Kreepy") soon reveals that this is just another primate prank. Horowitz's staccato rhymes work well in tandem with his bold mixed-media collages in colored corrugated paper and charcoal pencil, which convey much visual humor. A standout depicts the stupefied man holding the jovial hippo aloft alongside the phrase "A hippopotamus on top of us." This foray into monkey business will elicit a large share of laughter. Ages 3-6.