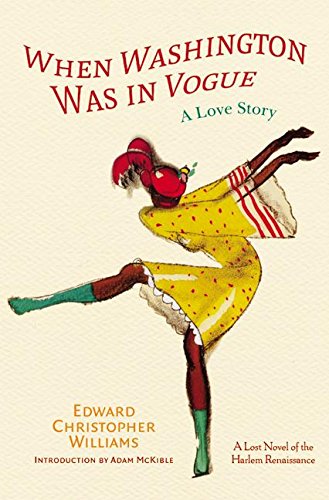 WHEN WASHINGTON WAS IN VOGUE: A Love Story

This lost epistolary novel of the Harlem Renaissance, originally serialized in in 1925–1926, is slight in plot but deep in detail, an invaluable addition to period scholarship. Williams, the country's first professionally trained black librarian, aptly portrays the 1920s African-American high society of which he was a part. After WWI, army officer Davy Carr moves to Washington, D.C., to research a book on the African slave trade. Lodging at the refined home of Margaret Rhodes, he meets her two daughters: older, serious Genevieve, and irrepressible, flirtatious Caroline. Davy immerses himself in their busy society, attending dances, teas, socials and sporting events, and, as in any novel of manners, he makes detailed observations of this new world's mores, writing his findings to a friend. Although he has a fine eye for details in others' lives, Davy realizes he has been blind to his own feelings for the mischievous and darker-skinned Caroline. Williams provides a glimpse into a parallel universe of privilege—in which slight variations in skin tone said everything about status, and stuffiness was de rigueur (Caroline, Davy muses, "makes not the slightest outward show of culture in her ordinary social relations, [but] she has... a perfectly uncanny fluency of speech, as I have found out to my discomfiture"). As a light-skinned man who refused to "pass," Williams had an abiding interest in intraracial tension, and the absence of white characters further dramatizes the issue. Though the story holds little suspense, McKible's discovery is sure to provoke scholarship and discussion, and attract well-deserved attention.