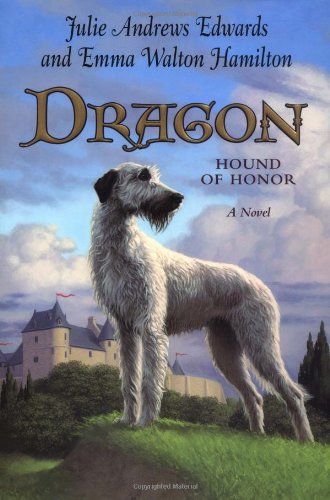 The mother-daughter team behind the Dumpy picture-book series here adapt "The Legend of the Dog of Montargis" (a version of the tale was included in William Bennett's ), set in a French village during the 14th century. Overlaying their narrative with medieval terms and French phrases ("Isabelle! Isabelle, you look !"), Edwards and Hamilton fill in the outlines of the story. After the eminently likable Montdidier, captain of the king's guard and nephew of the count of Montargis, is savagely murdered, his wolfhound, Dragon, leads 13-year-old Thierry (a character invented for this telling), who is the count's ward, and DeNarsac, captain of the count's men-at-arms and a close friend of his family, to the spot where the body is buried. As the action moves from Montargis to the bustling Paris court of Charles V, Thierry and DeNarsac are resolved to crack the mystery of Montdidier's death. Another puzzle clouds the air: why does the noble Dragon savagely attack the chevalier Macaire? When Thierry and DeNarsac suspect that Dragon is accusing Macaire of Montdidier's murder, the king decides to allow for "the judgment of God": he sets up a duel between the dog and Macaire, with the idea that God "will aid the cause of the innocent and bring down the cause of the guilty." Readers who like their costume dramas heavily embroidered with high sentiment (and many adverbs) will enjoy this fare; others may find it overdone. Ages 9-up.